What do you think about the New iPhone in 2018?

We found some news and rumours from David price in UK,it's about Apple's new iPhones for 2018 (aka iPhone 11, iPhone XI or iPhone X Plus): their release date, new features, design, price & tech spec.

Apple's next iPhone update for 2018, according to the latest rumours, will see three new iPhone X-style handsets launched at the same time, including a larger iPhone X Plus and a cheaper LCD model. In this article we round up all the news about these new phones' release date, names, prices, design changes, tech specs and new features.

A new video shows dummy models of the new handsets, while icons in iOS 12appear to confirm an all-screen design for the iPhone X Plus. And multiple sources now predict Apple Pencil support in the new premium handsets - although one key analyst doesn't think that will happen.

For advice related to the current lineup, read our iPhone buying guide and roundup of the best iPhone deals. And we have a separate article addressing iPhone SE 2 rumours.

2018 iPhone name: What will the new iPhone be called?

There are enough potential names for the next iPhone that we could write a whole article just about that!

It sounds like Apple is finding it just as difficult to choose a new name for the new 2018 iPhones.

A Bloomberg report at the end of August 2018 claims that a source has indicatedthat Apple is struggling a bit with the naming conundrum.

Apparently, company marketers have "Altered the names multiple times". The current favourite seems to be "iPhone Xs", despite the fact that Apple's concerned that Xs sounds a bit like excess - as in too much, or alternatively, Xs as in extra small...

However, it doesn't sound like Apple will refer to the bigger iPhone X Plus as a Plus at all - the Blooomberg report claims Apple will stop using the "Plus" designation, opting instead to use the size as the differentiator, as it does with the iPad Pro. And, we'd add, if you were to refer to it the iPhone 10s then it sounds a bit like the tennis edition!

Confusing the matter even further, that Bloomberg report suggests that Apple may stop using "Plus" to indicate the larger model, opting to use the size instead. So, like the iPad Pro, which has two sizes, the iPhone Xs would distinguished by the size of the screen. Apparently Apple’s did toy with using iPhone XsL for the larger model, but it doesn't sound like that was met with approval.

As for the cheaper iPhone X-style model, previously Apple used the "C" designation when it introduced the iPhone 5c, so there is some speculation that it could be called the iPhone Xc. But, the Bloomberg report notes that the iPhone 5c was apparently not very popular so Apple may not repeat that strategy.

We also think it's unlikely that Apple will revive the iPhone SE with a X designator for obvious reasons.

Incidentally, Bloomberg refered to the new handsets by the following codenames:

BlueFin Research think the new phones will be called: iPhone 9, iPhone 11, and iPhone 11 Plus.

It's not only the iPhone X name that is fraught with difficulties. We can't help but wonder, if Apple calls the successor to the iPhone 8 the iPhone 9, what will they call it next year? Ten is already taken?

iPhone release date 2018: When is the new iPhone coming out?

We expect the 2018 iPhones to be unveiled in September. This would be one year after the iPhone 8 launched, and fits Apple's usual release calendar.

On 21 August, German website Macerkopf claimed that the new iPhones will be available to pre-order on Friday 14 September. That site says that German networks are preparing to start taking pre-orders on that day, following an event on Tuesday 11 or Wednesday 12 September. This could suggest that the phone will go on sale on Friday 21 or, at the latest, Friday 28 September. In 2017 the official release was on Friday 22 September.

A French radio station has claimed that its sources have indicated that the iPhone event will be on Wednesday 12 September.

Kuo wasn't the first to point to a delay. A Korean report in June claimed that the cheaper model wouldn't arrive until November, but most analysts seemed sure that production plans were on schedule. Ming-Chi Kuo, for instance, said Apple is focused on ensuring all the new models are ready to meet the same shipping date, and claimed in June that despite entering mass production later than the other models, the 6.1-inch LCD iPhone will hit stores at the same time.

However, by August a couple of analysts begab predicting that the LCD model could be delayed, with it shipping a month later than the iPhone X successor and its larger counterpart. Katy Huberty of Morgan Stanley, as per this Barrons report, said:"We currently see no delay in the ramp of Apple's upcoming flagship 5.8-inch or 6.5-inch OLED iPhones," adding: "However suspected issues with LED backlight leakage have caused a 1-month delay in mass production of the 6.1-inch LCD iPhone." Her sources advised that the 4 week delay is down slightly from the previously expected 6 week delay.

A Bloomberg report also points to problems with the LCD panels as a reason why manufacturer Hon Hai didn't begin assembling the LCD phones until August, while the OLED iPhone manufacturing started a month earlier.

TrendForce also thinks shipments will commence in both September and October.

To ship the three phones at different times wouldn't be that unusual - in 2017 the company didn't launch all of its new phones at the same time: the X arrived one month after the 8 and 8 Plus.

New iPhones 2018: Have the new iPhone case in time?

Yes,some plastic case supplier has opened the new iPhone case mold to it in China.They can supply the free samples to the truly custom wholesale clients.

Following of the pictures show: 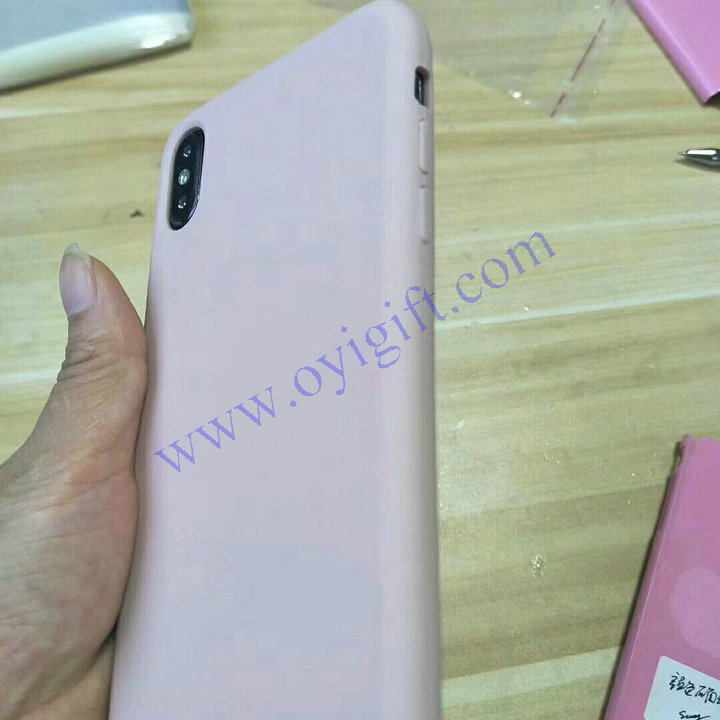 New iPhones 2018: How many new iPhones will launch?

Most reports point to three.

That's what analyst Ming-Chi Kuo predicted back in November 2017, adding that these would have the same all-screen design with the now-familiar notch. In January 2018 he followed up with more details:

There is some disagreement about the size of the largest model; an Olixar leak backs up the 6.5in measurement above, but Nikkei, citing "a source privy to the company's product designs", argues that it will be 6.3in.

But according to DigiTimes analyst Luke Lin, there will actually be four new iPhones, including an additional smaller handset:

We think that's pushing it for a single event.

He believes that Apple is concerned about "the negative impact of a higher price," but also that it has an improved cost structure thanks to assembly yield improvements. He suggests the following prices:

However, in July 2018 Kuo was suggesting that the 6.5-inch OLED iPhone model is likely to be priced around $1,000, like the current iPhone X, so there may be no price reduction.

He still believes the 6.1-inch LCD iPhone X will retail for around $700.

According to TrendForce, prices may start at $699.

Will there be a cheaper iPhone X?

A number of reports suggest a far cheaper iPhone X-style handset is in the offing. An Economic Daily article from October 2017, for example, predicted a budget-friendly model codenamed Hangzhou, while Piper Jaffray analyst Michael Olson has predicted that an iPhone X 'Lite' will be released to cater for those were put off by the iPhone X's price.

Over the months that followed these two reports it became quite clear that Apple is working on a new 'cheaper' iPhone X-style phone. However, how 'cheap' it will be remains to be seen. Even if an X Lite replaced the SE as Apple's entry-level handset it would still be more expensive: the SE starts at $349/£349 and even the iPhone 6s is still available from $449/£449.

With the three rumoured new iPhones said to sport the notch rather than a home button we can expect 2018 to mark the move away from the familiar iPhone design as everything takes on the X-style introduced in 2017. Here's everything we've heard about the 2018 iPhone's design so far:

We expect all of Apple's late-2018 iPhones to adopt the all-screen iPhone X design. This means a bezel-free design, Face ID camera, and no Home button.

The bezel-less design allows Apple to fit a larger screen into the same size of body; for this reason a "reliable supplier information source" has told Macotakara that the so-called iPhone X Plus will have a giant 6.5in screen but a chassis of the same dimensions as the iPhone 8 Plus (with 5.5in screen).

We also expect the new models to feature a notch at the top of the display, incorporating the FaceTime camera and facial recognition sensors.

Case maker Olixar has produced three screen protectors based on the expected measurements of the three new iPhones, which MobileFun published details of in June. If the dimensions are correct - and Olixar has been right before - the 6.1in LCD iPhone will have a slightly thicker bezel.

All of this seems to have been confirmed by device icons discovered in iOS 12 by Guilherme Rambo. These show all-screen, notched devices in two different sizes:

PREVIOUS：How to maintain your case? NEXT：10 Fun Ideas For Gifting a Silicone Phone Case